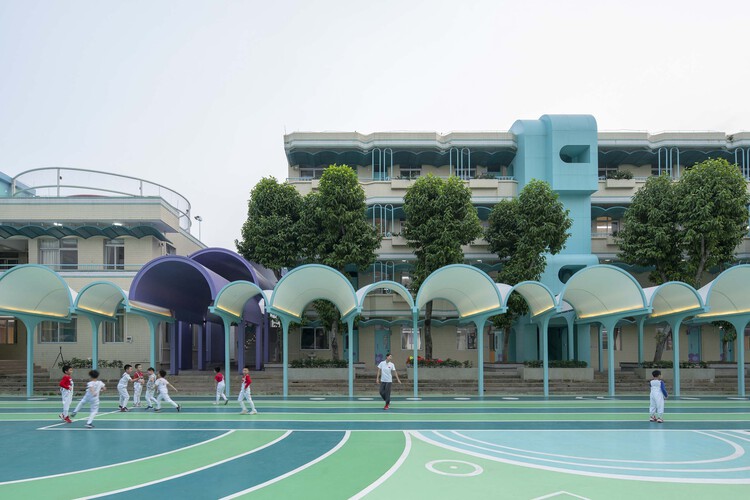 Text description provided by the architects. Longjiang Central Primary School (Jinping Campus) is located at the foot of Jinping Mountain, Longjiang, Foshan. It was rebuilt from the existing Jinping Middle School in order to meet the growing demands for high-quality education in the central urban area. After the renovation, the lower grade campus can accommodate 20 classes of grades one and two. The renovation takes the advantage of the site, extracting a series of natural elements from Liyugang Park in Jinping Mountain and bringing them back to the campus design. By integrating and interacting with the natural environment, a campus that learns in nature is formed. This “campus in the park” or the “park in the campus” builds a bridge for first and second-year students to transition from kindergarten to primary school.

The campus before renovation – Jinping Campus is located in the center of Longjiang Town. It used to be the site of Longjiang Middle School and the stone road preserved on the campus has carried the memories of local people. Although the old town has a profound historical background, its crowded circulation in the central district has also brought many issues to the school:
1. The transition space in front of the school is blocked by two residential buildings, resulting in a non-obvious entrance left. It not only has a negative influence on the school’s overall appearance but also brings safety and traffic problems to the campus when students are entering and leaving;
2. There is a drop of about 7 meters between the sports grounds and the school building, and the main transition is only dependent on an outdoor staircase, which makes the circulation in between extremely inconvenient.
3. The atrium on the campus is currently underused and it has been treated as a parking lot for a long time. In the condition of poor accessibility to the sports grounds, it shows a lack of activity spaces during the break between the classes.
4. The current school building has not met the various demands for education, more flexible spaces are needed.

Lightweight design and the plug-in transformation – Due to the fact that the school building has just been renovated in 2020 and there are a lot of large trees that need to be preserved around the expanded sports grounds, a lightweight design and plug-in approach are adopted through design thinking. On the premise of respecting and retaining the existing characteristics of the site, designers fully took advantage of the existing site conditions and carefully made a micro-renovation of the campus. Via a series of renovations, basic functional spaces in the campus are optimized, underused areas are reactivated, and environmental quality is greatly improved. The lightweight design thinking not only brings new vitality into the campus but also repairs the fragmented relationship between the street-campus-park.

Different representations of a geometric motif – By exploring the plug-in transformation, the focus has gradually transformed from solving a series of problems to designing a set of “adaptive” blocks. Under this circumstance, designers select a motif of arches as a starting point. By following the same logic, different ‘products’ are designed to adapt to different environments and to deal with different problems. These adaptive plug-ins are perfectly inserted into the existing site, reconstructing the order between buildings and showing an interlocking spatial sequence throughout the site.

Revitalizing outdoor spaces: park walk in the school – To preserve the original campus, designers retained the facade of the existing building, the symbolic trees on the site, and the stone road that carried the history of the campus. By inserting a series of “adaptive” blocks, the outdoor spaces are revitalized and a park walk experience is brought into the campus. The archway at the entrance is placed to enhance the sense of entering and the ‘Super Arches’ make the campus a landscape on the street. The ‘Cloud Corridor’ is placed to provide a shelter for outdoor activities and enhance the sense of enclosure in the atrium. The ‘Library Castle’ is placed in the stairwell to create a book corner around flexible spaces. The ‘Hiking Trail’ and the ‘Sky Bridge’ are placed to improve the accessibility to the sports grounds and highlight the experience of mountain climbing.

Blurring boundaries: sports field in the park – In terms of the sports grounds, designers blurred the boundaries between the campus and the parkland and brought nature into the school. By introducing the concept of ‘study in nature’, several functional modules are lightly inserted in between the green spaces, which allow students to explore and learn in a natural environment. By blurring boundaries between the campus and the parkland, the sports field naturally blends in with the surroundings. The functional modules in the parkland fulfill the functions of the library, fencing hall, activity room, and other second classroom spaces. The surrounding modules in the sports grounds, present a range of facades and frame different perspectives of nature so that the students can explore the beauties of nature while studying.

Bridging the gap between kindergarten and primary school – As a period of transition from kindergarten to a higher grade, designers combine written language and graphic language through the signage system, to stimulate students’ imagination and help them to understand the specific function. For example, in the design of the signage system, designers used two forms of flowers to represent two different grades, and a more readable LOGO is also applied to make the different functional classrooms distinguishable.

The place to preserve memories – The campus is the best book. Through the design process, designers are eager to create a particular space that can store memories and give students a sense of belonging on campus. Such as the dramatic entrance arches, the glass corridor that is showing subtle gradations of light and shade, a library hidden in the park, and the fencing hall, which is called the ‘Little Arena’ by the students. It is hoped that these places will preserve the most precious memories for everyone on Jinping Campus in the future.