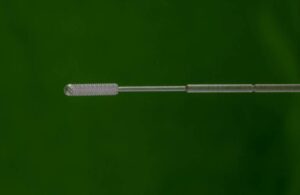 The University of South Florida received the Patents for Humanity award for its patent of a 3D-printed nasopharyngeal swab.

Developers created the swab in the early part of the COVID-19 pandemic. It represented a solution to production disruptions during a time of critical need for COVID-19 testing. The U.S. Patent and Trademark Office (USPTO) awarded USF with the Patents for Humanity prize.

Other recipients of awards include the National Institute of Allergy and Infectious Diseases of the NIH, Regeneron Pharmaceuticals, Gilead Sciences Inc., and Caron Products. The USPTO plans to celebrate the winners at an awards ceremony on Feb. 16, 2023.

USF said in a post on its website that, due to the urgent global need for swabs, its team decided to forgo monetization of its invention. The 3D-printed swab team provided design files and clinical data at no cost to hospitals, clinics and licensed medical device companies around the world. This offering came provided the swabs were produced for their own use.

The team developed the 3D-printed prototype in the space of one week in March 2020 as the pandemic took hold. It was made up of representatives from USF Health, Northwell Health, Tampa General Hospital and Formlabs. The team used Formlabs’ 3D printers and biocompatible autoclavable materials.

Researchers then benchmarked prototypes against standard flocked swabs for viral sample retention in the laboratory. USF Health Morsani College of Medicine (Dept. of Internal Medicine) tested them for patient safety. After the swabs passed these tests, the team initiated a multisite clinical trial across dozens of hospitals in the U.S. That list included Tampa General Hospital, Northwell Health in New Hyde Park, New York, and Thomas Jefferson University Hospital in Philadelphia. The hospitals compared the performance of the 3D-printed swab against the standard flocked swabs.

After that, they went on to share their design with hospitals, health systems, the military and clinics around the world. To date, USF shared its design with institutions in more than 60 countries. These institutions produced more than 100 million swabs.

“I am so proud of how our USF Health team stepped forward to combine their expertise and innovation with the teams from Tampa General Hospital, Formlabs and Northwell Health to help save lives around the world,” said Dr. Charles Lockwood, EVP for USF Health and dean of the USF Health Morsani College of Medicine. He also serves as EVP and chief academic officer at Tampa General Hospital. “This recognition by the U.S. Patent and Trademark Office validates both the tremendous power of academic medicine, especially during a crisis, and the values and commitment these teams have for contributing to the greater good.”