Alternative procurement has allowed a major investment in Portland Port to match the budget and put work on track to meet a demanding completion deadline.

Images of numerous cruise ships moored off the Dorset coast were published around the world during the pandemic. Now, multiple cruise ships look set to become a more regular sight at Portland, Dorset.

Portland Port is investing £25M in a new deep water berth (DWB) so that it can simultaneously accommodate two 350m long cruise ships. Knights Brown is the managing contractor charged with bringing the work in on time and budget.

With 58 cruise ships currently expected to dock there in 2023 and the first two of the larger ships both due to arrive in early May 2023, the pressure is on for Knights Brown and the team of contractors currently working on the DWB.

Construction is underway, but Portland Port had to look to a bespoke procurement approach, directly awarding packages of work so that it can manage the design and construction risks and bring the work in on time and on budget.

The former naval port became a commercial operation in 1996 and Portland Port chief executive Bill Reeves says a series of investment projects has been delivered there in the last seven years. 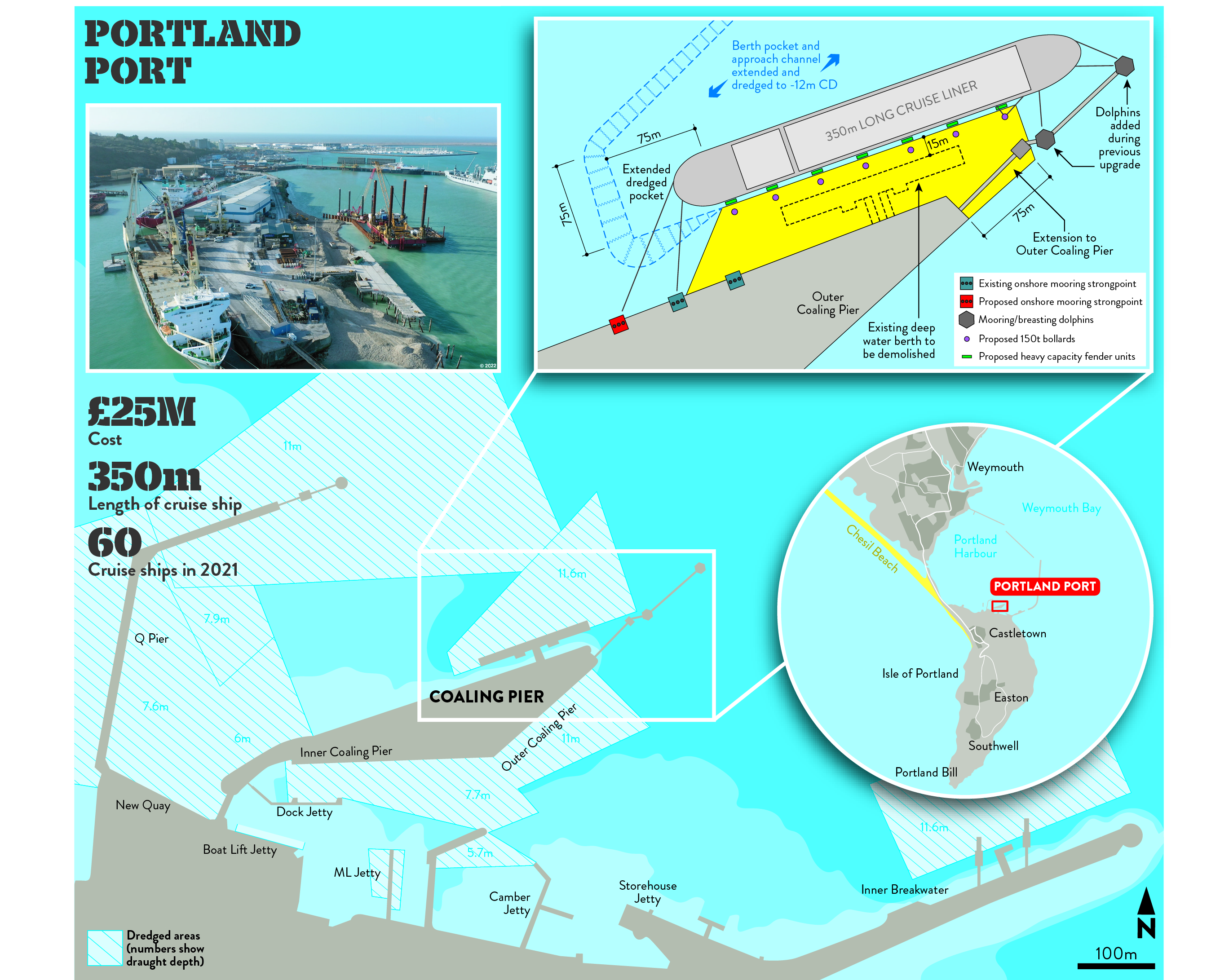 “The port has already made an investment on the Outer Coaling Pier (OCP) with two additional dolphins to be able to take a single 350m long cruise ship, as we could see how the cruise business was developing with cruise lines ordering much bigger ships,” explains Reeves.

The cruise business at Portland Port has grown significantly from 17 ships in 2016 to 60 in 2021. However, it is not the only business that has ramped up at the port – animal feed imports have also increased over the same period and the number of Royal Fleet Auxiliary ships berthed at Portland has remained at a high level too.

“The increase in the animal feed imports created a conflict with the growth in the cruise business, but we want to be able to service all our customers,” says Portland Port general manager landside Alex Hayes in explaining the need for the latest investment.

Because of the volume increase in the cruise visits, we need on occasion to berth two big cruise ships at the same time

Reeves adds: “We needed to do a number of things at the same time. Firstly, because we only have one deep water berth capable of taking bulk discharges – the OCP – that restricted the logistics. We really needed another solid berth. Then at the same time, because of the volume increase in the cruise visits, we need on occasion to berth two big cruise ships at the same time.”

The existing DWB is 150m long, limiting the length of ship that can be berthed there to 250m but the type of construction was also an issue as the deck is mounted on piles, rather than being a solid berth.

This limited the load that can be put against it from ships as well as limiting vertical loads from cranes and cargo during unloading.

Reeves says: “Our customer who imports the animal feed has a 350t crane for discharging, which calls for a solid berth. Everything was pointing at us needing to turn the DWB into a longer berth that was also a solid structure.”

The resulting £25M project is the biggest investment made so far by the port. The previous projects were a £4.5M upgrade of the Queen’s Pier and a £3.2M investment in the new OCP dolphins.

The DWB project will extend the berth to 250m in length, so the port will be able to accommodate two 350m ships at a time – one on the OCP and the other at the DWB. It also extends the available quay space from 5,000m2 to around 21,000m2.

The project involves construction of a combi wall – a quay wall formed from concrete-filled steel tubular piles with sheet pile sections between them – where the DWB pier currently sits. It also includes a 75m extension to the OCP to create a solid 250m quay wall for both berths. The height of the quay walls will be 5.6m above chart datum, so the quayside will match in with the existing infrastructure. 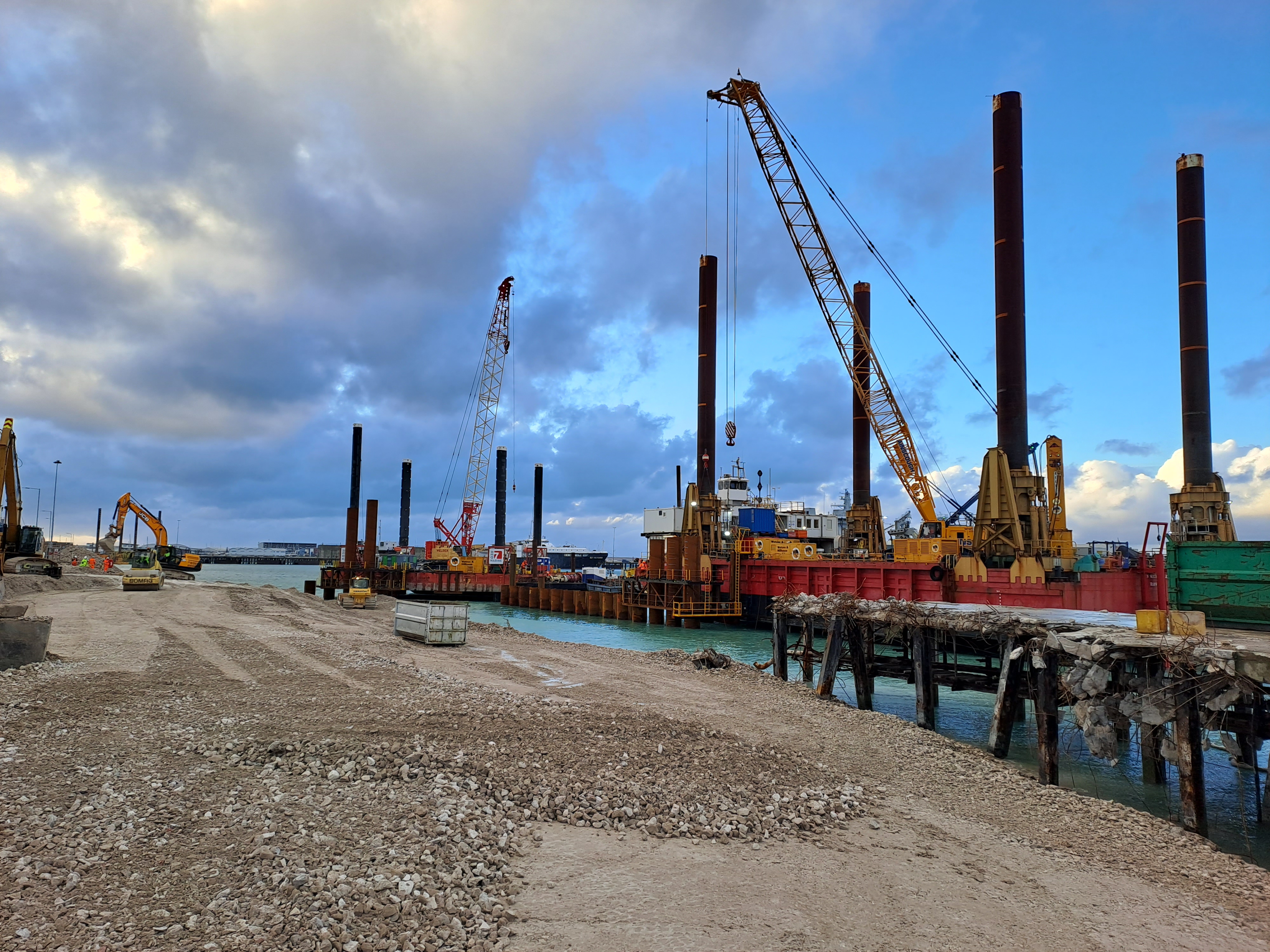 Work on site started in October 2022

While a team of contractors is now working on the project, getting to the start of construction on site in October 2022 was not straightforward.

Prequalification of tenders for the design and build contract started in September 2021 with risk passed almost completely to the contractor. Portland Port ended up with four bids for the work, but all the bids were well above the budget, which was originally set at £20M.

“One of the bids was over twice the budget,” adds Reeves. “The budget we are now working to is £25M as a result of inflation and rising costs, but none of the original bids met the price we could afford and the project was not viable at the bid costs.”

Not being able to build the necessary infrastructure to accommodate two 350m cruise ships at a time meant that Portland Port would have had to turn away business and would have limited growth.

“We had to think creatively to find a solution,” says Hayes.

Reeves and Hayes then started a dialogue with the bidders to try and find a way through and quickly ruled out two of the firms, which left Knights Brown and one other.

We had to think creatively to find a solution

Based on the conversations, Reeves took the decision to negotiate directly with Knights Brown in an open manner to value engineer the project. “At that point Portland Port and Knights Brown became a ‘we’,” says Reeves.

Nonetheless, it became clear that neither a traditional approach nor value engineering were going to bring the cost of the work within budget. Risk allocation was too big an issue to overcome.

Reeves says: “At that point we moved to the port taking the design and construction risk and placing all of the key contracts directly.

“Knights Brown was appointed as the managing contractor rather than the main contractor with responsibility for the technical, quality, logistics and programme delivery aspects of the work.”

The final result is a bespoke form of contract that Reeves describes as more of a partnership, while Hayes adds that it created transparency in the collaboration.

There was an open discussion on what Knights Browns’ costs to manage the contract would be. But to ensure both organisations have a vested interest in getting the job done jointly at the minimum cost, they will share what is left of the contingency budget on a 50/50 basis at the end of the scheme.

Reeves believes that the arrangement means Portland Port and Knights Brown are aligned to the end goal and the relationship will help prevent it becoming an adversarial one. “If you can get the relationship right at the start, both parties can win,” he adds.

As well as managing the contract, Knights Brown has secured the work to construct the capping beam, install the anchor wall and waling beams and place the tie rods within the quay wall.

The principal designer – now engaged by Portland Port – is Ramboll which was originally Knights Browns’ design partner at the bid stage.

Piling work is being undertaken by Red7Marine using steel piles bought by the port itself.

The same goes for the infill. This material is being produced and placed by ESG Trading but it was the port that secured a deal with the local quarry owners and made arrangements for the haul road that only crosses the local road network once, keeping the articulated dump trucks away from residential areas.

The contracts were signed in mid-June. Work on site started on 1 October and phase 1 is due to finish in mid-April next year, just ahead of the first cruise ship arrival of the 2023 season. At this stage the finished surface will be operational but temporary with the final surfacing due to be undertaken next winter.

When NCE visited the site, only a few piles had been driven, as deep obstructions had caused some challenges.

Knights Brown senior design manager Nick Gibb and Hayes were confident that a solution had been found and the programme would soon be back on track.

The problem is also only expected to present a challenge to a small number of piles that were relocated later in the design stage.

The fill is being imported and placed concurrently with the piling programme and the work is progressing well. Placed fill is being hydraulically compacted below tie rod level.

Although there is much to do before April, Gibb is confident that the piling will be completed at the end of January with the fill placement, tie rod installation and capping beam construction all expected to be finished in March.