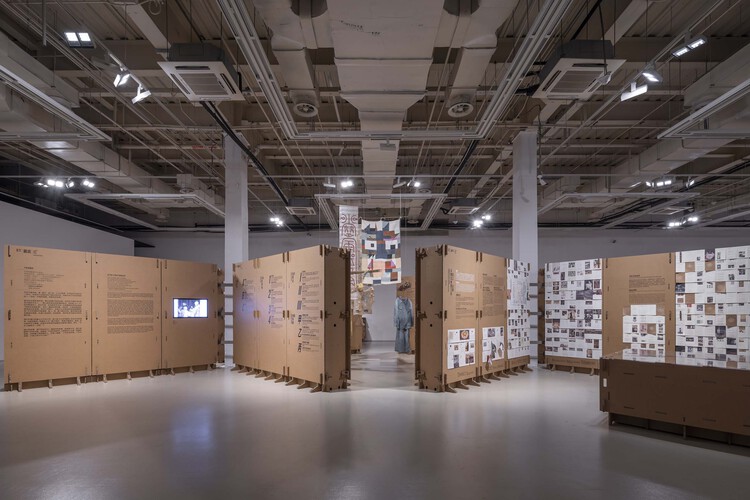 Background – Since the exhibition of “Long Life Design: Thinking and Practicing” has been held in the OCT Art & Design Gallery in Shenzhen (exhibition space designed by Studio 10) and Pearl Art Museum in Shanghai (exhibition space designed by Kooo Architects), curator Mr. Zuo Jing has been carrying out practices and research on sustainable design, hoping to present an exhibition with the concept of “Zero Waste”. Our team has also been exploring sustainability in design practices. It was in such a context that our cooperation was made possible. This time, we designed the setting for the “Back to the Future: Breaking the Time Barrier” exhibition co-curated by Zuo Jing by simply using cardboard.

Recyclable Exhibition – It is a general situation that much more attention is paid to the work before the exhibition, rather than what happens afterward. Exhibition space is usually temporary with a short life-cycle, and the exhibition installation period between opening and dismantling is also extremely short. For these reasons, a rapid, low-cost common method, i.e. the use of light steel keels, gypsum boards, and latex paint (as well as other similar materials), is frequently adopted for the construction of exhibition settings. However, at the time of dismantling, the construction can only be demolished completely, resulting in a large amount of garbage and much cleaning work.

Layout and Corrugated Cardboards – Existing columns: The existing space is rectangular, which is about 40m long, 16.5m wide, and 6m high, with a row of concrete columns in the middle. The columns, which have a very strong presence, are 40cm-wide each, and the distance between them is 7.4 meters. A large number of traces of wrapping, hanging, drilling, and demolition have been left on the surface of these columns, which indicates that many exhibition activities previously held here have taken rapid construction and demolition, causing irreversible damage. A lot of metal connecting components for anchoring are reserved on the columns, which seems to default to an exhibition construction method that has to wrap and hide these columns.

“X-wall”: We believe that these columns are not the negative part of the space, and they are not necessarily to be wrapped either. As the space is strongly defined by the regular columns, they can be used as the basic elements to create spatial order. Radiating from the center of each column, four display walls are combined to form an “X” shape on the plane. Each integrated “X”-shaped wall divides the space around each column into four isosceles triangular areas facing outwards. Meanwhile, two halves of the “X-wall” in between the columns form an inward-facing rectangular space. These two types of spaces can satisfy the needs of dividing the exhibition into different sections for various curators, allowing for greater flexibility and orderliness.

Structural Connection and Details – Mortise and Tenon Assembly: With corrugated cardboards as structural components, CNC cutting technique was used to make concave and convex edges, through which a structure of “mortise and tenon” is created, to form insert buckles of the cardboards. Taking firmness into consideration, boards with two different thicknesses (15mm and 20mm) have been selected, with a standard size of 1.2m long and 2.4m wide. The smallest modular unit for the cardboard wall is 1.2m wide by 2.4m high, with a thickness of 0.6m. Besides the six pieces of cardboard installed at the top and bottom, left and right, and front and back, a fixed connection plate is also added in the 2.4m-high middle section, in order to ensure structural stability. With a width of 1.2m, each modular wall unit has slots on the upper and lower sides for horizontal connection. Therefore, a quarter of the “X-wall” can be made by three 1.2m-wide modular cardboards.

Structure Details with Consideration of Exhibits and Graphic Design: Exhibits in the form of graphics and texts are mostly screen printed and directly pasted on the cardboards, while some others are fixed on the cardboards by nails. Other exhibition equipment including LCD screens, ipads, mp3 players, and earphones, as well as physical exhibits such as books and woodblock print templates, require special structural components in order to be fixed and well displayed. The biggest challenge is to install eight 53-inch LCD screens. In terms of spatial effect, the screens need to be inset into and align with the surface of the cardboard. They also need to be set at different heights and horizontal positions, to balance with the orderly displayed graphics and texts. Therefore, a special structural scheme of installation needs to be applied. In order to realize this idea and shorten the construction time, flexible reinforcement components are set in the module, so that the LCD screens can be installed in any position by adjusting the special components in vertical and horizontal ways. The ipads, mp3 plays and earphones are also set on cardboard with assembled mortise and tenon components. For the placement of books and woodblock print templates, hot-bent acrylic boards and connecting cardboards are customized according to the size.

Detailed Construction Measures for Stabilization: Corrugated cardboard is relatively light compared to other conventional construction materials. In order to stabilize the exhibition walls and stands, a number of construction measures have been carried out. One of the measures is to install supporting legs and skirtings. Each 1.2m-wide module is 15cm above the floor and is equipped with 3 plates as supporting legs, and each plate protrudes 15cm from the exhibition wall in both directions. It helps avoid damage to the cardboard walls caused by visitors who touch unintentionally feet when standing and watching the exhibits. Besides, the cardboard walls are reinforced simultaneously. Inside each module, a certain amount of space is reserved for setting a sandbox (existing props owned by Power Station of Art) as a counterweight, so that every single module has enough load-bearing capacity to ensure stability in case of that the cardboard walls are touched or pushed. Furthermore, the 3.6m-wide walls formed by every three modules are connected with each other near the center of each column. Connected by steel components, the overall structure can be further stabilized.

Rapid Construction and Recycle – Rapid Production and Installation Process by Non-professionals
Due to the low density of cardboard, it takes a shorter time for CNC cutting and processing, compared with other conventional building materials. All the 320 pieces of raw cardboard used for the exhibition were processed into 2,566 cardboard components in less than two days. Finally, 42 vertical exhibition modules with a size of 1.2m*2.4m*0.6m and 22 stand exhibition modules were assembled within only two days by six or seven people on site. Such an efficient construction process benefits from not only the lightness of cardboard material but also the non-necessity of using any assembly tools. Moreover, ordinary people can also take over the work of professional constructors to assemble the cardboard with bare hands. It also provides great convenience for the following activities of material recycling and reuse.