David Rockwell Is Not Done Evolving David Rockwell founded his eponymous New York practice in 1984 and, guided by a love for both hospitality and theater, has spent nearly four decades bringing to life such disparate projects as the W New York to Hollywood’s Kodak Theatre (now the Dolby Theatre), and, more recently, Nobu Hotels and the set for the hit Broadway revival of Into the Woods. With a spate of new work keeping Rockwell and his team busy, including the Perelman Performing Arts Center at New York’s World Trade Center Complex, an event space for the food rescue organization City Harvest in Brooklyn’s Sunset Park neighborhood, celebrity chef Melba Wilson’s soul food restaurant in Newark, New Jersey, and the Miami outpost of Fotografiska photography museum, Rockwell continues to evolve. Here, the prolific designer dives into his creative journey.

How did your love of design begin?
Looking back is always interesting, because things look so much clearer in the rearview mirror. Designers have a lot of language to talk about their aesthetics, but they emerge organically. In my case, a lot of my thoughts about design came out of a childhood in which I moved around a lot with four older brothers—really like a big theater troupe—falling in love with the Jersey Shore, where my mom started this community theater [company]. I was fascinated with how a suburb, for a few months a year, becomes this acting community in which everyone participates. That was life-giving for me.

You also spent time growing up in Mexico. How did that experience build upon your love of the theater?
We moved to Guadalajara when I was 12, and the streets were really my theater, because homes were small. Mercado Libertad, which is one of the great markets in the world, is 400,000 square feet under a modernist 1960s concrete structure. It’s miles of amazing spices and sandals and sweaters. The color, the quality of light, and the sense of movement of Guadalajara were strong influences. 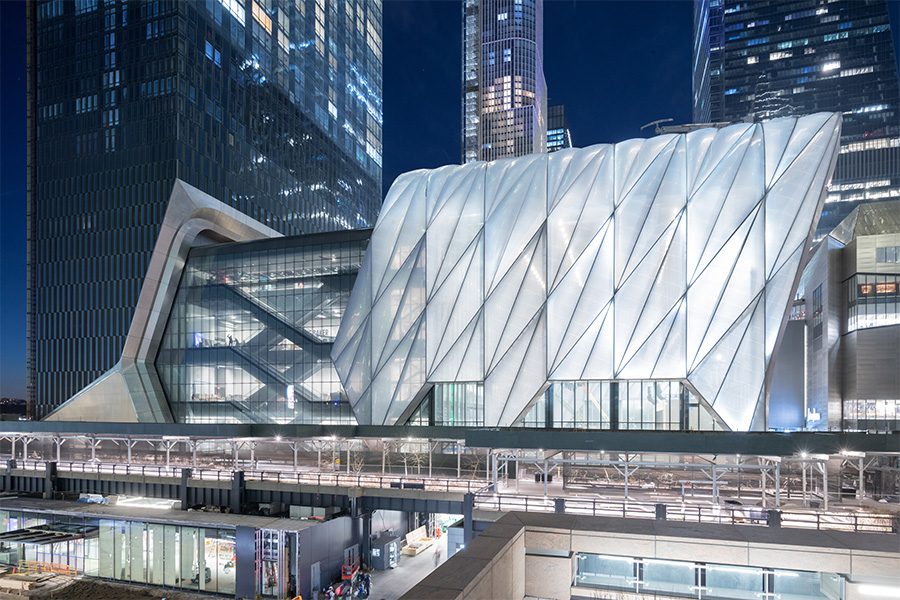 A collaboration with Diller Scofidio + Renfro, the Shed in New York includes a retractable shell and 200,000 square feet of versatile space

How did you first start working on restaurants?
Le Crazy Horse Saloon from Paris, which is the legendary, very arty strip show that’s been running for decades, was coming to New York and I was the young project architect, so I went over there to see it. I met some interesting, smart food people, and one of them was kind enough to ask if I could redesign a restaurant in four weeks. It was Le Perigord on the Upper East Side. That led to being offered Sushi Zen, which was the launching point for me. There was no fear. It was all adrenaline. There had been ideas in my head ever since I was a student about space that I put into that, including uplights in the floor and taking a sushi bar and making it a lightning bolt shape so that there were many groups of four that could gather around it. We’re living in a period where people want things right away and everything is expendable. Sometimes it takes many years to have a thought and have it lead to something. Sushi Zen was a lot of thinking about narrative design and collaboration.

What were you hoping to create when you started your own firm?
There was no goal about being a small studio or a big studio, but there was an ambition and a curiosity to try lots of things. While our studio does many other things other than restaurants, hospitality as a thought process and as a rigor and as a kind of DNA was one of the building blocks. I believe in quantum leaps. You don’t have to take little steps if you feel like you’ve done the work and you’re curious about it. That led to being invited to speak at the TED conference for the first time, and TED founder Richard Saul Wurman gave me some advice. He said, ‘Don’t just promote your work on stage. Talk about something you’re an amateur at.’ I talked about the relationship between theater and architecture. That was the beginning of four or five years of me meeting with directors and sketching for free and having conversations around theater design that led to that avenue opening up. 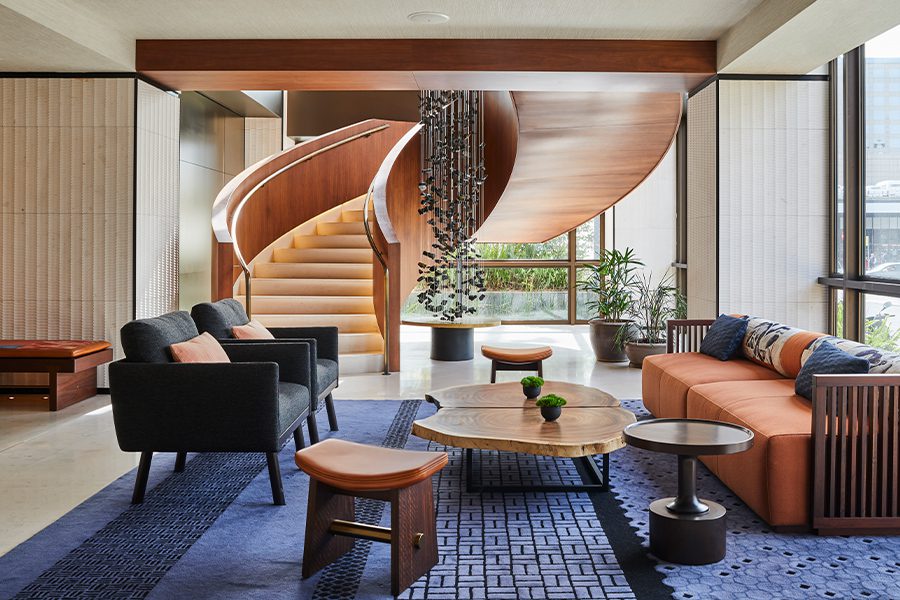 What was your first professional foray into the world of theater?
The Rocky Horror Picture Show was my first show, and it was so incredibly thrilling. I almost turned it down because, having lived in Mexico for those years, I didn’t see the movie. And there was a certain part of American pop culture that I wasn’t privy to. So, I rented the DVD, and I couldn’t figure out why everyone was so in love with this piece. And the director Chris Ashley and the producer Jordan Roth said, ‘Rocky Horror is about self-creation. It’s about an audience creating the world they want.’ That was a major moment. Then I did Hairspray, a reminder to me that when you’re working at a restaurant, design sets the room, and the star needs to be the food. And if it’s successful, the food and the design and service come from the same point of view. The same was true in theater in that case. We were the setting for this explosive musical.

Is there a project that encapsulates your hospitality and theater expertise?
TAO Downtown in New York is the purest evolution of what I think the relationship of theater and architecture is. The stairs down become a stage, and my thesis to the clients was, instead of a narrow stair, people are going to inhabit them like bleachers or a door stoop in New York. Then it took some convincing to do the Quan Yin, the statue with the video mapping, which is an accent point at the end of the bleachers. 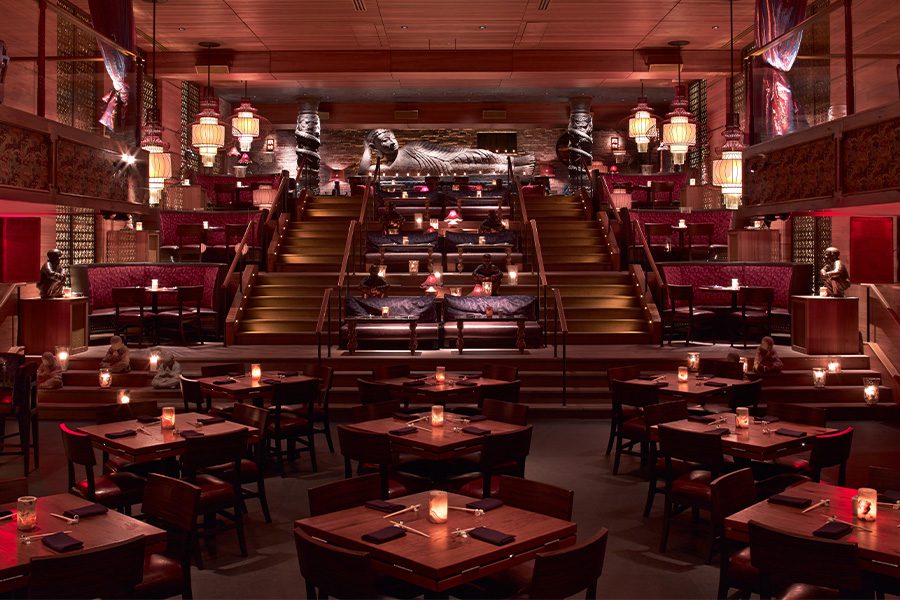 How did you elevate the airport experience with JetBlue Terminal 5 at JFK?
I spent so much time in airports, and you could never really see how to move. The traffic patterns always seemed counterintuitive and chaotic. With JetBlue, I started with movement, and brought in a choreographer with the idea that I would start with movement.

How important is the idea of movement through space?
I am a student of human behavior, and Ken Walker, one of my early bosses, suggested I always keep a tape measure with me and start to measure banquette diameters and start to understand the metrics of personal space and physical space. When I look at a restaurant, I’m always trying to learn about where people like to gather, how rooms feel better with people in them and not in them. I always ask, what does it feel like to be one of the first 10 people in a restaurant? Is it a great big restaurant? Once it’s full, there’s a dynamic, but how does it fill up? That’s choreography and movement.

What are some of the projects you’ve worked on that have been especially meaningful?
One would be DineOut NYC, which we started in the early stage of the pandemic with [chef] Melba Wilson and the NYC Hospitality Alliance. It grew out of speaking to restaurateurs all over the country, trying to have dining return to the city in some smaller, safe way. It led to a nonprofit that then got involved with the city to help with guidelines and with the Department of Transportation to do these outdoor [dining] installations. It was a mission-driven thing that was very satisfying for me during a time of seeing the city in such bad shape. It was the most accelerated learning process because I had to learn about the speed at which cities work, cutting through the red tape, and looking at design at scale. The other one would be Imagination Playground, which was very similar in that it followed 9/11 when both my kids were young. We approached the city about creating a new kind of playground that would be more imaginative and inspired, like how I played as a kid with boxes and things that we just put together, not a linear one-way play system. 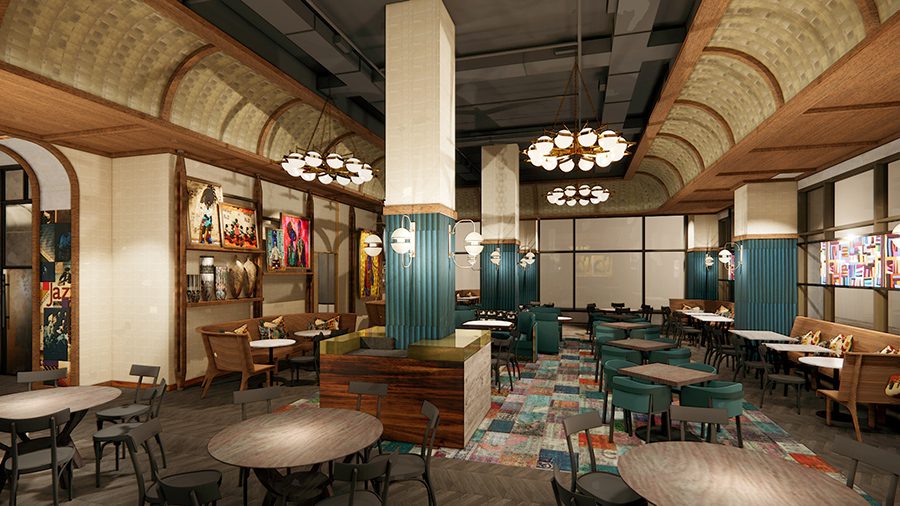 After all these years and projects, how would you define hospitality?
Hospitality is designing around empathy. It comes down to a magnetic force of creating a place where people want to be together and share time, and we’ve found that a great tool for doing hospitals or educational buildings. There are huge opportunities for people in hospitality to make a big impact on the built world and apply what they know to all kinds of things. That challenges us to stay curious.

What’s your favorite stage of a new project?
Once you see the bones start to come together, that’s when I dream. I’m most engaged at the first 10 percent and the final 20 percent.

Did you ever think you would create what you have with Rockwell Group?
Never. It’s the fact that I get to work with so many kinds of designers, and one of the things we’ve learned is pairing experienced senior designers with people who are just starting out and inviting everyone to have a conversation. The fact that we’re not vertical, we’ve been able to do the things we do.

How would your colleagues describe you?
If someone shows me a solution, my job as a leader is to turn it upside down and pull it apart, break it down piece by piece, and then put it back together. Curious and optimistic are the two qualities I hope people would say. 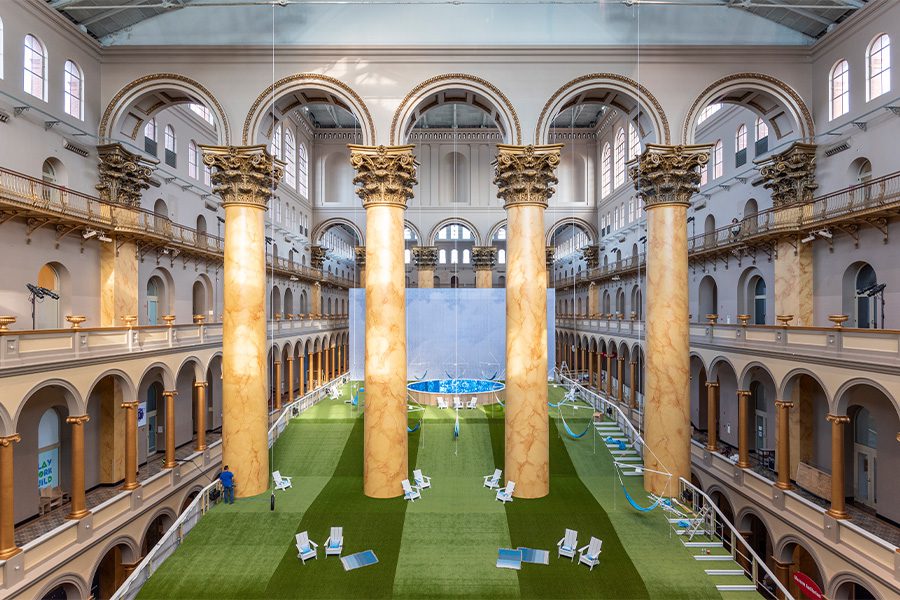 What is one of your greatest lessons learned along the way?
Every detail matters, and the things you’re doing now lead to what you’re going to be doing next. Sometimes the smallest details create the biggest impact.

Is there a project you would love to add to your portfolio?
An opera house, because there’s the audience, the stage, and a whole backstage world. It would be interesting from an architectural point of view to create a place that links all of those. We had a chance, being the collaborative architects on the Shed [at Hudson Yards in New York] to sort of look at playing with that barrier between front of house and back of house. Opera houses are ripe for reinvention.

What is something people might not know about you?
I’m an avid football fan. I was born in Chicago. We left when I was 3 years old, but it’s bizarre the roots you have to a place. If I could be the field goal kicker for the Chicago Bears, if that were possible, I would pivot to that.