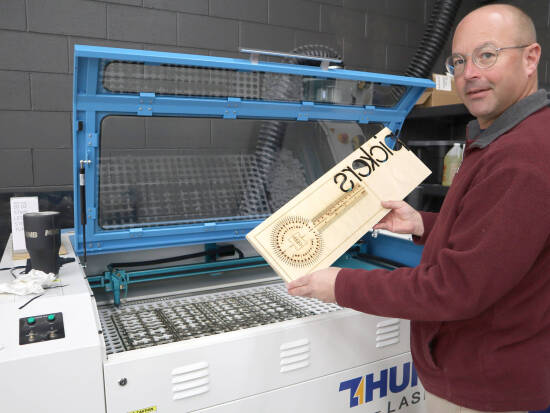 New owner of Acme Printing Company, Ben Blecha, demonstrates the laser printing machine that can engrave on a wide variety of materials.

McCOOK, Neb.  A one-time customer of Acme Printing Company was so impressed with the services they provided in building websites and developing brands for his numerous businesses, he decided to buy the company.

Withstanding the test of time, the recent purchase of Acme Printing Company by Ben Blecha is securing its position in the community and region as the go-to place for design, print, branding, and web services.

In 1932, Acme Printing Company was established by Russell Southard at the age of 25. He bought the business from Lester Walker for $10,000. Southards son started a competing printing company, Touch Printing, but eventually, the two rivals merged. 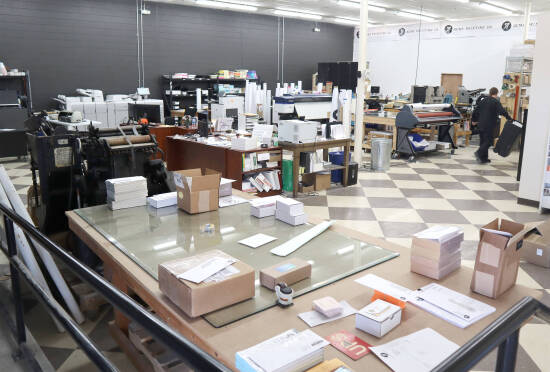 The open floor plan in the new space at 702 West D Street allows for better communication throughout the production process.

Rose Chancellor purchased Acme Touch Printing in 1985 and after many years of owning the business, she sold to Jared Muehlenkamp, on April 1, 2014. Jared operated the company for the next eight years as Acme Printing Company in downtown McCook on Norris Avenue.

Exactly eight years later, on April 1, 2022, Ben Blecha purchased Acme. Blechas vision is to provide a quality, local print shop with a continued focus on assisting businesses in all their marketing needs. The business has moved from Norris Avenue to 702 West D Street.

Even though the location has changed, the faces remain the same. Muehlenkamp is now the Chief Design Officer employed by Blecha, as are Acmes existing designers, press operators, and office personnel.

The open floor space allows for plenty of room for the numerous printing apparatus required to provide the various services Acme offers. From large-format printing, catalogs, flyers, vinyl, postcards, die-cut, and laser engraved  about every offering requires a different machine to produce. Having everything in one space, rather than on three different floors, as was the case with the Norris Avenue location, has provided convenience and efficiency to the operation.

We were really cramped in that other space, Muehlenkamp said, explaining that they would often have to climb several flights of stairs to complete a job from start to finish. Now, all inventory, machines, and personnel are housed in a wide-open space, allowing for improved communication and easier movement from one phase of production to another.

Blecha has plans to grow the business by expanding the offering of the marketing services he so valued to other businesses. Website design, branding, search engine optimization, content management, and social media will be key offerings of the business. They have added staff, with plans to add more, to help expand those services to their customers.

Blecha invites the public to come and see the space for themselves on Thursday, Nov. 17 for an open house from 4:30 to 6:00 p.m.

Muehlenkamp attended McCook Community College studying graphic design, followed by the University of Nebraska Kearney. He worked in Lincoln, Neb., for a sign shop where he learned the sign and design business. He then moved to Los Angeles, but the home fires tugged at his heart. So he purchased Acme Printing Company from Rose Chancellor in 2014. I came back and experienced that hometown feel, Muehlenkamp said.

Blecha attended the University of Nebraska Lincoln studying engineering and agriculture. After having his leg amputated due to cancer, he changed his focus to prosthetics, attending prosthetic school in Dallas. He bounced around the country, working in South Carolina, Kansas City, and Denver. He decided to return home to Southwest Nebraska and started a private practice in Benkelman.

At the same time, he was developing a knee brace to give the owners of dogs with hip and knee problems an alternative to surgery. With financial investment from relatives, Dr. Wayne and Lori Watkins of McCook, Blecha decided to turn his focus to the dog knee brace business, Hero Braces, which are manufactured in Benkelman.

Over time, that business has grown and Blecha recently acquired WiggleLess, a back brace designed to help dogs with intervertebral disc disease (IVDD) or degenerative myelopathy, a disorder of the spinal cord similar to ALS in humans. Blecha has updated the design and added different user-friendly features. The back braces are currently manufactured in California, although Blecha has intentions of expanding his businesses in Southwest Nebraska so manufacturing can take place locally.

On April 1, 2014, Blecha purchased Burns Lab, renaming it Henhat. The full-service orthotic laboratory produces orthotics in the back of the same building in which Acme is located. Again, the open concept provided at the space allows production to take place efficiently. Henhat has developed an iPhone app where the foot can be scanned and then emailed directly to the lab. The application has reduced shipping costs and times by eliminating the need to send a cast of the foot to the lab for the orthotic to be produced.

Between the various businesses in McCook and Benkelman, Blecha employs about 20 individuals. His businesses have grown, transformed, and adapted over time. The passionately curious entrepreneur will continue to find opportunities to complement his existing businesses and capitalize on the abundant talent and resources Southwest Nebraska offers.