The designer, the surrealist and the potted plant A long, long time ago, in an office in a major European city, I sat in a meeting room waiting for the Important People to arrive, marvelling at the fact that there was a Miró hanging on the wall. 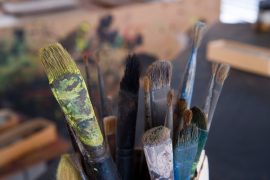 Hire designers. Let them do research. Then listen to them.

It was not the only painting in the room, but the Miró was specifically hanging behind and partly obscured by a rather large potted plant.

How many Mirós do you need to have in your possession for you to put one behind a fern?

What else must you have in this collection for a Miró to not be the apple of your eye?

I never got to ask.

They talked to our Important People about Important Stuff and then we got to the digital bit.

You remember those days?

When banks would add digital stuff to the wider client account review agenda in an ‘I will show you mine if you show me yours’ spirit of one-upmanship?

So we showed them ours (that was where I came in). We talked to them about our new analytics capabilities and all the cool stuff we could now do for them. We walked them through our API store. Admittedly, there was some really interesting and useful stuff there, but as the audience in these meetings was neither technical enough to appreciate the innovation nor close enough to operational realities to appreciate the solution’s impact, we kept it short and snappy and hoped for the best.

These guys were already clients anyway. Their teams were using half the stuff I was talking about. So I soon wrapped my piece, took my seat and I was all ears for they were about to ‘show us theirs’… so to speak.

And I was excited.

These guys had a fully-owned digital subsidiary to go with their Miró.

One of the very first digital banks in Europe back then… and they had recently launched an app. An app! (Yes, this was a long time ago.)

I am not ashamed to admit I was easy to impress back then.

I didn’t ask about the backend, didn’t mind batch processing and didn’t despair in all the things you couldn’t do on the app. These were early days and this was new and I was excited to hear how they went about designing their proposition and prioritising features and capabilities.

“We don’t talk to clients,” said the CEO with a look on his face that suggested there was a limit to how many stupid questions he was willing to entertain in one day, hence why we never got to the Miró.

“They are our customers, we know what they want.”

I was reminded of this chap a couple of months ago when I was speaking to the CEO of an aspiring start-up. One of those that got funding before they even got the idea going, that have advisors onboard before getting themselves a CTO and use swag as a placeholder for product-market fit.

The start-up was building a youth proposition.

They were still working out their USP.

Were they running any focus groups?

Hell no, says the CEO.

“Those kids, they have the attention span of concussed goldfish,” he said. “They don’t know what they want and they change their mind every three seconds. Talking to them would be a total waste of time.”

Disrespecting your users is always an excellent place to start.

Maybe I should ask this guy about where he would place a Miró painting if he had one.

But back to my point, because believe it or not, I was building up to one.

Maybe the sheer blinding arrogance of these two examples is unusual. Maybe it is. And maybe it isn’t.

The vast majority of companies of all sizes, from corporates to touchy-feely start-ups, do not spend enough time working out what problem they are solving and for whom.

Many start off well. They work out the product by talking to potential customers but then sort of stop. It’s heads down to get it out the door and who has the time to keep doing endless research?

Your customers change. The market changes. The segments you try to add to the mix may not be as similar to the ones you are already serving. A pink credit card may, just may, not be the way to target women. I’m spitballing here.

Every day we either use poorly designed services or read about new products and features launched and withdrawn because they failed to deliver any value to anyone.

And there is a way around this, you know. A simple one.

No, no. I know you know that you need designers, but I am not done yet.

And then, and this bit is the most important of them all, then listen to them.

Crazy idea, I know, but bear with me.

Listen to what they discover.

Don’t carry on building what you were doing anyway because of the sunk cost or because it’s almost done or because you don’t like what they discover.

Don’t ask them to align their findings to the existing roadmap.

Do not tell them to add what they found to the backlog. If it’s not already reflected in the stories you are working on, it’s time to change those stories, not ignore reality.

Do not send them to talk to marketing about creating some visual assets around the things they found the clients want.

Do not reduce them to a messaging alignment machine for a tone-deaf product.

Hire them. Let them do their work. And listen to them.

And realise it’s an ongoing thing.

It’s not one and done. Both because the market keeps shifting and because you have blind spots.

Hire designers because you have blind spots. We all do. And because we do, the world is littered with opportunities missed. Opportunities to do better both on a human level and a commercial level. Because for every pink credit card issued, there is a demographic whose needs are not understood and therefore not served.

For every empty bank account offered via a mobile wallet as a gesture towards financial inclusion, there is a demographic left unserved. For every ‘faster horse’ we devise, there is the total addressable market of potential car owners, blissfully untapped.

And no, I don’t know what the winner product idea is. If I did, I wouldn’t tell you, I would launch it myself. But I know what you need to do to get the killer product in your chosen vertical. For any product. For all the products.

If nothing else, a designer will teach you how to respect your users and stop you from shoving a potted plant in front of a Miró… you absolute heathen.

She is a recovering banker, lapsed academic and long-term resident of the banking ecosystem. She is chief client officer at 10x Future Technologies.

All opinions are her own. You can’t have them – but you are welcome to debate and comment!