The upcoming American Speed Festival presented by Comerica Bank at M1 Concourse in Pontiac, MI will shine a light on Shelby American, with several stunning examples on display including the first racecar Shelby ever sold new: a 1963 Cobra CSX2154, one of the cars coming from the Cobra Experience in California. Carroll Shelby was of course the man at the helm of the company that bears his name, which produced a slew of cars attaining a near-mythical status. Alongside Shelby through the company’s formative years was designer Peter Brock, who second only to Shelby himself was responsible for the cars that reigned supreme at races from Laguna Seca to Le Mans, and of course, Daytona.

In celebrating the Shelby marque, Brock will be the guest of honor throughout the American Speed Festival and will feature in a live discussion hosted by former racer and raconteur extraordinaire David Hobbs.

Brock was born in Sausalito, CA in 1936. He developed a passion for automotive design early on, buying a 1949 MG at age 16 upon which he learned to work on cars. Around the same time, he traveled south to watch the road races at Pebble Beach that featured the likes of Phil Hill among others. Before he was finished with high school, he traded the MG for a 1946 Ford Convertible which he painted white and added two parallel blue stripes over the hood and trunk. A design iconography that will forever be associated with Shelby was born.

“I’ve had a love of automotive design since right from the beginning,” Brock recalls.

Brock enrolled at Stanford University to study engineering, but dropped out and headed to Southern California where he attempted to enroll at the prestigious Art Center of Design in Pasadena. He needed to have a portfolio to be considered and not having anything with him to show, he went to his car and drew several car sketches which he presented to the admissions office. He was immediately accepted.

Just a year into his time at Art Center, Brock was recruited by General Motors to join its design department, becoming the youngest designer ever at GM in in the process. It was one Brock’s sketches chosen by GM VP of Design Bill Mitchell that would become the next Corvette in the form of the Stingray.

“Working on the Corvette Stingray program was one of the greatest things in my life,” Brock exclaims. “I was 19 years old at the time and back then they put the young designers into what was called the ‘Research Design Studio’ where they were turning young designers loose, because it had nothing to do with production design.

“It was 1957 and Chevrolet management had cut the Corvette program off,” he goes on. “But Bill Mitchell wanted to revive the Corvette program against top management’s wishes, so the only way to do that was in secret. So he sent it to us in the Design Studio and put three or four of us to work on it. He’d been to the Turin Auto Show and was heavily influenced by the streamline designs he saw there. He asked us to use those designs as a theme. After a few days he came into the studio and pulled a sketch off the wall and asked who did it. I raised my hand and he says, ‘now everyone has to do something better than this.’ He came back a few days later, pulled another sketch off the wall and asks who did it. I raise my hand again and this time he says, ‘Okay you’re going to lead this project and you’re going to design the next Corvette.’” 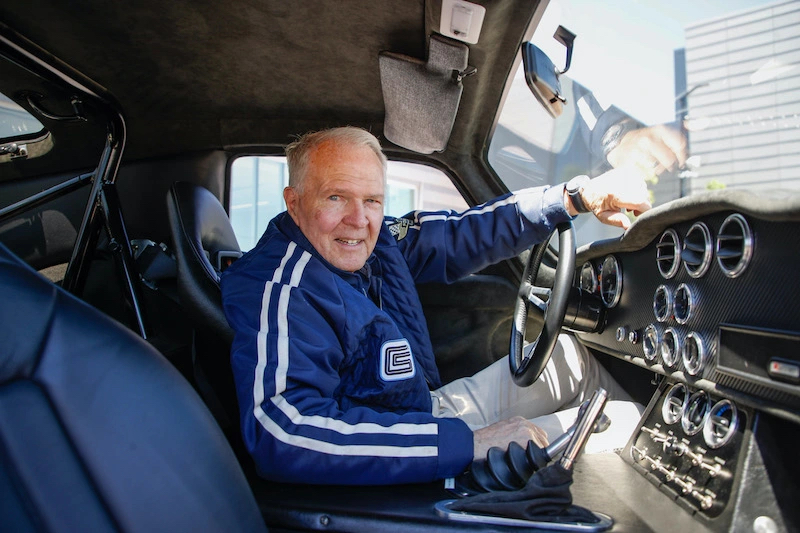 The work included the design of the Corvette Stingray as a racecar, which didn’t end up being produced until after Brock left GM.

Brock teamed up with Shelby in 1961, originally as part of Shelby’s high performance driving school and in doing so became the first paid employee of Shelby American. His tenure lasted just four, highly prolific years. During that time Brock not only handled all of the graphic design work, he also designed many of the components for the Shelby Mustang GT350 as well as the designed several racecars culminating in the Shelby Daytona Coupes that won the 1965 FIA GT World Championship: the first, and to date only, American manufacturer to win the championship.

“When I first started at GM, I spent a lot of time in the library and came across some mimeographs of German aerodynamic designs from the 1930s. I couldn’t read the German, but I could understand the numbers,” Brock explains. “It was pretty unconventional thinking because at the time the teardrop shape was what dominated aerodynamics. But their idea went with a flat roof and a chopped-off back end.

“Years later we had an opportunity at Shelby to put a new body on the Cobra Roadster, which only had a top speed of 160mph,” he goes on. “We could change the body but not the chassis. I thought. ‘we have enough power, we just need to make the car more slippery through the air. The thing was so strange-looking, with funny roof and chopped-off tail, and there were a lot of smart guys working at Shelby that were hard to convince. We took it to Daytona and after a few laps our drivers, Dave MacDonald and Bob Holbert both told us that we are running away from the Ferraris. So we cut the rpms down by 500 and we were still faster. We did it again and found we had the same speed, but could go two laps more on fuel. That’s how we ran the race and the same thing happened at every track after.” (Note: MacDonald and Holbert did not finish the 1964 Daytona Continental 2000kms but did win the GT Class at both Sebring and Le Mans that year.)

Upon leaving Shelby in 1965, Brock hung his own shingle: Brock Racing Enterprises, or BRE as it was more commonly known. While BRE worked with several car brands, it was most well known for racing success with Datsun (aka Nissan). BRE enjoyed factory status and went on to dominate SCCA National and Trans Am Series championships through mid-1972.

Brock then founded Ultralite Products, which rapidly became one of the largest companies developing products for hang gliding. But it wasn’t long before Brock returned to the automotive world as a design instructor, consultant, author and photographer, which he continues to this day.

“The thing I look back on is that I’ve had this chance to work with the most interesting people, the most passionate people, in automotive design,” says Brock. “I’ve had a chance to work all over the world and every place I’ve gone to, there have been a lot of tremendously talented people excited to work on what the project at hand was. Each of them had something to contribute – a whole different philosophy or idea. So, when you look back, it’s the people that have made it so interesting.” Los Angeles Reckons with a Dark History by Asking the Public How to Memorialize the 1871 Chinese Massacre | Features
Read Time: 53 Min