Aiming to ‘celebrate all types of art,’ Groton tattoo shop expands after a year open Owner of Midnight Angel Studio, Danielle Medrano, works on a piece for a customer in her storefront at 1313 Gold Star Highway in Groton, Saturday, Aug. 20, 2022. (Daniel Passapera/Special to The Day) 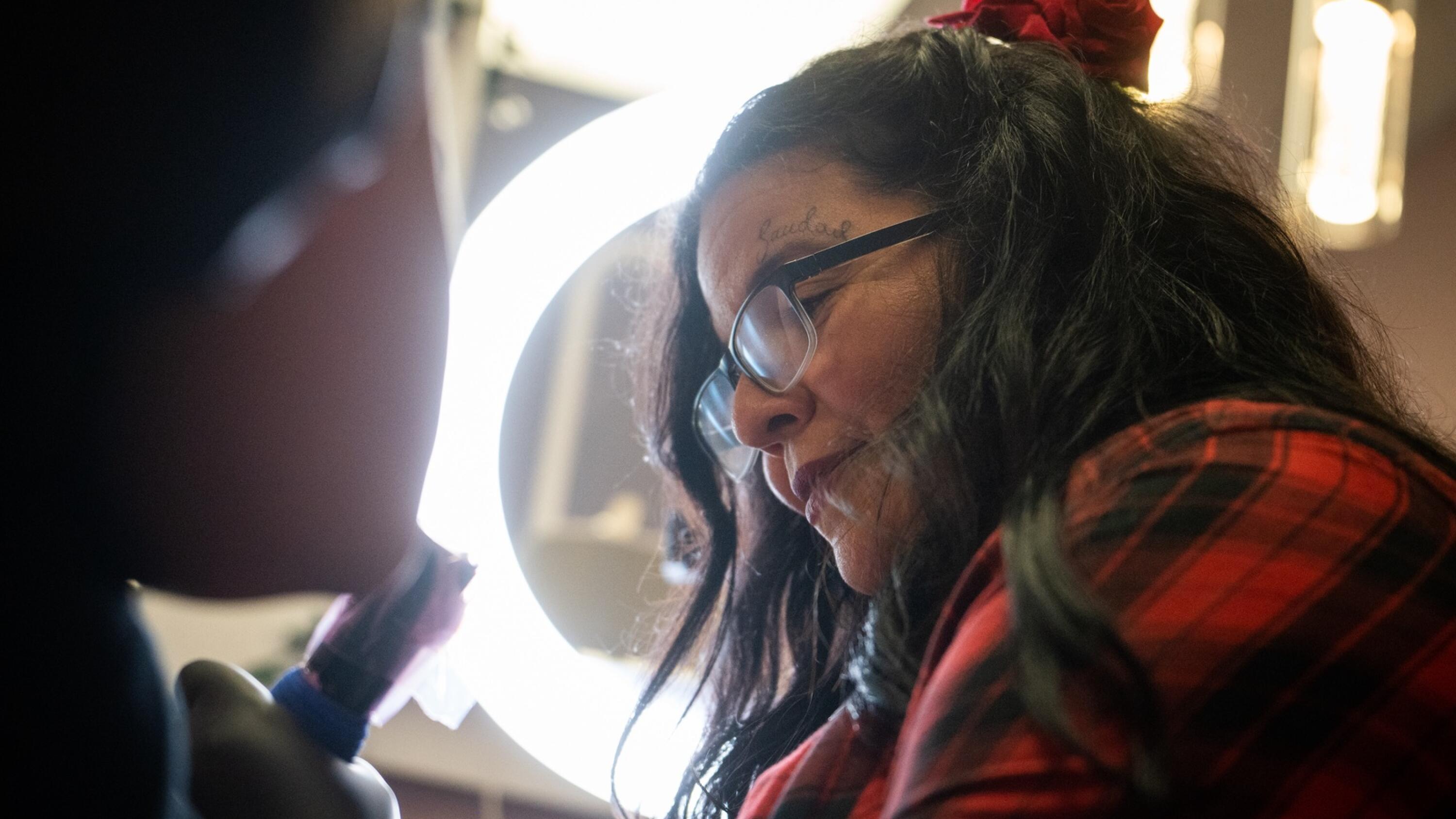 Owner of Midnight Angel Studio Danielle Medrano finishes a piece for a client on Saturday, Aug. 20, 2022 at her storefront located at 1313 Gold Star Highway in Groton.(Daniel Passapera/Special to The Day)

Groton ― Danielle Medrano says that at the end of the day if you’re lying in bed thinking about what you could’ve done better ― exercised, been a better parent, read that book ― the “midnight angel” is the voice that comes to you and says, “It’s tomorrow already.”

Midnight Angel Studio is the name of the tattoo shop she opened at 1313 Gold Star Highway last May, and the name is symbolic of her desire to create a positive, welcoming environment.

She currently has one other tattoo artist, Chris Scheck, as well as an apprentice. At the beginning of August, she added adjacent space where hairdressers, massage therapists and nail techs can rent space. Medrano said earlier this month she has a hairdresser but is in the process of looking for more, and has a massage therapist.

Medrano said the goal of the expansion is to “celebrate all types of art,“ and she also makes jewelry and does wood burning. Her future goals include hosting arts and craft classes for all ages and events to support charities.

She describes the theme of her shop as vintage, haunted and gothic, with decor featuring skulls and crystal balls, dried flowers and butterflies, angels and drawings of women’s faces.

Medrano said what she finds most rewarding about tattooing is connecting with clients and “with their energy and life force,” so she can customize their designs to their needs. She likes learning about the reasons behind designs.

Client Jon Zaharie of Pawcatuck said getting tattooed is like a therapy session, and getting one done by someone you can talk to and relate to is huge.

“I’ve been tattooed by multiple artists, and once I found her, she’s the one,“ Zaharie said. And it’s become a family affair. He signed off on his oldest daughter getting a tattoo with Medrano when his daughter was 16, his wife and her mom have an appointment for a mother-daughter tattoo, and his wife and other daughter are trying to find a design.

Medrano tattooed Zaharie’s right arm, which has a clock for each of his three children and an hourglass of a father’s hand catching sand from a child’s hand. He also has a bear, for his nine years of coaching Stonington Bears youth football.

For his next appointment, Zaharie said he doesn’t know what he’s getting. He’s putting his faith and trust in her.

Tracy DeLaura, a Waterford hairdresser who has known Medrano since middle school in Groton, also said she just tells Medrano to do what she wants. She’s ended up with “all kinds of flowers and butterflies.” Medrano said she prides herself on her linework, something Zaharie and DeLaura also pointed out.

“She’s in charge of the environment, so it’s very comfortable to women, and we’re on the rise, getting tattoos,” DeLaura said.

Striking out on her own

Medrano, 51, got her first tattoo when she was 23, a heart with wings on her right ankle. She remembered thinking, “I could do this.” She also remembered she didn’t find the environment very welcoming.

And she’s gotten many more tattoos since. She has a pirate to honor her fisherman son and another tattoo that honors her child with Down Syndrome. There are tattoos honoring her Portuguese, Mexican and Native American heritage, and a witch, and a praying mantis.

Now married, she was a single mom of three when she became a tattoo artist 11 years ago. Medrano said she previously worked at 12 Tattoos in Groton but once the pandemic hit, she started taking longtime clients at her home and saved up money to open Midnight Angel Studio.

She’s seen a lot of shifts in the industry over the years. Custom artwork didn’t used to be so popular, with more people getting tattoos out of flash books. ​​​Medrano said there’s an idea that men are better at tattoos, and she’s had people look at a tattoo she did and assume it was done by another artist.

For some women getting tattooed, feeling comfortable is especially important: Medrano said she’s tattooed over mastectomy scars and c-section scars and self-harm scars, “and there’s been a lot of tears and a lot of thank-you’s.”