The majority of consumer FDM 3D printers print at a snail’s pace that even a basic model might take hours to complete. But things will be different in 2022 when a high-speed 3D printing device hits the market. By high-speed, we mean the new high-speed 3D printer from Geeetech called THUNDER, set to debut on Kickstarter available in early September. Thunder will have a fast printing speed, an all-metal body, a powerful cooling system, and a large printing capacity. Take a look at what we know about THUNDER so far.

What Is a 3D Printer Used For?

3D printing comes with a wide range of applications. You can create consumer goods, architectural models, industrial items, and more. Because 3D printing service is useful in practically every industry, it includes a wide range of technologies and materials to make the printing process more efficient. This is where Geeetech’s lineup of 3D printers come into play.

What Is a Good 3D Printer to Start With?

After two years of development since 2020, Geeetech has perfected 3D printing technology, allowing their new and upcoming THUNDER 3D printer to print at high speeds without sacrificing quality.

As per reliable Geeetech sources, the printing speed of the THUNDER can reach up to 300mm/s with an acceleration of 5000mm/s2 for the X-axis and 4000mm/s2 for the Y-axis. Depending on your selected 3D model’s complexity, you have a spare 30%-70% printing time but with the optimum printing quality.

For example, printing a 3D castle with a dimension of 120x62x96 mm on THUNDER will only take 223 minutes compared to other printers that can produce it in 710 minutes at most. From this, you can save 69% of your time. 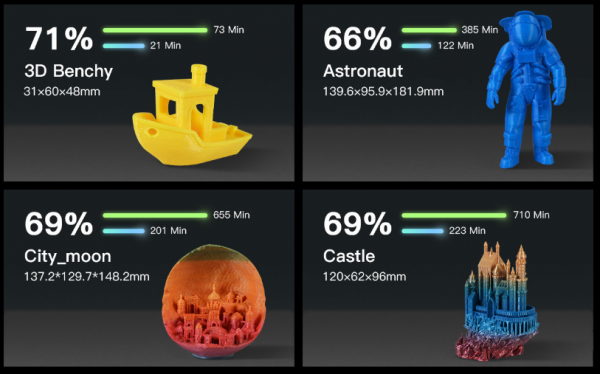 With THUNDER, Geeetech used a twin drive gear extruder, a high-power heating module, and a big volume nozzle for extrusion. This is alongside five cooling fans for hotend and model cooling. The new Geeetech device outperforms standard FDM 3D printers in every aspect, from 3D printer filament melting through extrusion and cooling.

Just to clarify, its high-speed printing is impossible without an efficient extrusion system and a robust cooling system. Meanwhile, THUNDER’s all-metal body with a dual Z-axis design assures machine stability when printing and moving at high speeds. Aside from its high-speed nature, below are some of the factors involved in the development of THUNDER.

This 3D printing equipment has a printing volume of 250*250*260mm and five distinct printing modes to meet a variety of printing demands. Thus, you will not only be able to print larger 3D models, but you will also be able to choose how they are produced. Additional features include break-resuming capabilities, password protection, and so on.

What Is the Best 3D Printer to Buy?

With an improvement to their 3D printer product line, THUNDER promises to provide a long-lasting and effective 3D printing service. Aside from its high-speed capacity, some of its capabilities were upgraded to some extent, allowing you to optimize your 3D outputs. Perhaps a fascinating aspect of this high-speed printer is that it runs at 0.1mm precision, so there is no sacrifice in printing quality even while printing at high speeds. The printed model has a beautiful surface, distinct angles, and sturdy construction.

To get your hands on this lightning-fast 3D printer, Geeetech will launch a Kickstarter campaign for THUNDER in early September, with prices starting at $399 for early birds. So don’t forget to make a run for it and buy it at an affordable price! Not just that, Geeetech will also host a subscription and giveaway activity for THUNDER on its official website. Learn more at geeetech.com

ⓒ This sponsored article was created by Techtimes. Learn more about partnering with TechTmes.